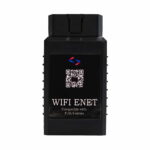 We are happy to introduce you our new wireless ENET adapter, compatible with F-series, G-series and I-series. We named it “mod WIFI ENET adapter“.

There is really big difference between our mod WIFI ENET adapter and D-CAN based adapters. mod WIFI ENET adapter uses ETHERNET connection (100mbps) to the car, not D-CAN (0.5mbps), so the speed of the data transfer is theoretically more than 200 times faster, which in the real life brings as low as 20 times faster speed, which means that if any coding/flashing job needs 2.5 minutes via our adapter, it will need 50 minutes if you’re using D-CAN based adapter (like the most on the market).

*What is ETHERNET (ENET) connection when we talk about cars? In September 2008 BMW announced that a new communication protocol will be added into their vehicles. They added an Ethernet connectivity, which means all the modules inside the car are now connected into a high speed Local Area Network, which means times faster speed communication compared with D-can diagnostic protocol. All of the F-series, G-series and I-series are having that faster communication protocol integrated.

mod WIFI ENET adapter is compatible with all OEM software applications available for these models – ESYS, ISTA+, INPA as well as great Android/iOS applications like Bimmercode, xDelete, xHP, MHD, DEEPOBD, BootMod3 and all of the others ENET compatible application.

How mod WIFI ENET adapter works: just plug it in to your car’s OBD2 port, pair your mobile device to the WIFI access point created by mod WIFI ENET and that is, you are now able to connect your mobile device with your car. It has a router inside it, so it’s not just an serial-to-WIFI or can-to-WIFI adapter, but it uses full functional LAN connectivity between the car and the adapter, which allows the fast speed described above.

*Not compatible with E-series

**We recommend you to unplug “mod WIFI ENET” adapter after doing the job, so please don’t leave it plugged for days, it will drain your car’s battery if you leave the car for a week without driving.

Note to all users: if you experience a problem with “Read coding data error”, while using Bimmercode, please keep your phone closer to the adapter when it reads/writes or find a location where there are no other wifi networks nearby. Even just one missed byte, caused by interference or poor wifi recemption, disrupts communication and Bimmercode takes the right decision to say -> better to start over.